Posted on December 15, 2017 by advaithjaikumar

On 4th December, the students of Christ Junior College were abuzz with excitement in anticipation of ‘The Flipside’, an amalgamation of three short plays to be presented by the students of Pierian Spring, the English literary club of Christ Junior College in association with Theatre Light Stories.
Pierian Spring, the English literary club is a fraternity of vivacious students with a literary bend of mind and a flair for the performing arts. While the thrust is on theatre, public speaking and writing, Pierian Spring is committed towards helping students drop their inhibitions and claim the stage.
Theatre Light Stories is an organisation comprising seasoned stage veterans-Mr. Pradeep R, Mr. Nalin Kumar, Mr. Anirudh Mahesh and Ms. Varshini Vijay, who, via TLS attempted to bring theatre as an art from the distant stage to the crowd. They have in their repertoire productions including The Salesman, Goldfinch and 8 to 8. They have conducted theatre workshops for corporate offices and colleges and have garnered acclaim for their work at Darpan, the Christ University theatre fest. TLS, provides students with the opportunity to whet their skills in acting, directing, writing and producing under experienced mentors.
The Flipside, a novel production aimed at telling, through three very different plays, the other side of every predictable story-
Rainbow Cake, directed by Mr. Pradeep R was a love story, describing the courtship of an entrepreneur, hoping to start an Ayurveda centre and an aspiring globetrotter. While the dessert ‘rainbow cake’ brought them together, they landed up finding themselves at very different ends of the spectrum. Through a well-received, light-hearted performance, the play explored thoughtful ideas about the constancy of change and the difficulty of relinquishing the clinging past.
Mis-s-fortune, directed by Ms Varshini Vijay and scripted by Mr. Anirudh Mahesh was an introspective piece, challenging the conventional ideas of God and fate. It followed the encounter of a chronic blame-shifter with his creator and his one chance to read his scripted destiny. 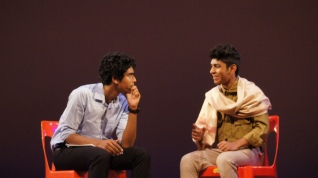 Absolutely Positively Mental, was a humorous-cum-sinister psychodrama, written and directed by students, about the investigation that ensued in a mental asylum following the mysterious death of an inmate. A crowd-favourite, the audience was left doubled up with laughter by the uproarious performance of the actors.
The Flipside brought with it a draught of excitement and experience for budding thespians and an afternoon of well-curated entertainment for students.

This entry was posted in Pierian Spring. Bookmark the permalink.